Snowdrops – tougher than they look! 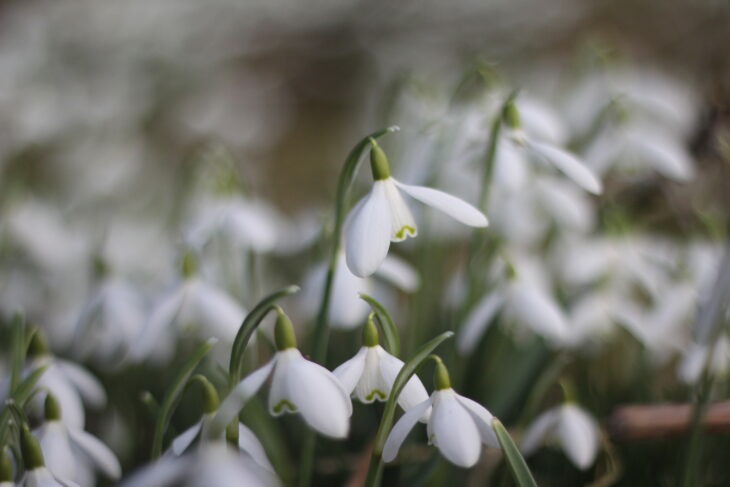 Head to any damp, shady woodland right now and there is a good chance you’ll come across one of my favourite flowers – the snowdrop. They appear towards the end of winter and are regarded as heralds of the coming spring. Winter is a dark time for me, when I often battle with my mental health, and I look forward every year to my first snowdrop, a promise of hope and lighter times ahead.

It might surprise you that snowdrops aren’t native to Scotland. They were brought here by religious groups in the 16th century due to their association with the Virgin Mary. Even now finding a drift of them in an isolated spot is a hint that perhaps a religious building once stood nearby. They’re not regarded as an invasive species, as they don’t spread quickly or replace any native plant and they provide an early nectar source for insects.

Snowdrops are amazing organisms. They can generate internal heat to melt snow and have their own antifreeze in their cells. A compound within them is used to treat Alzheimer’s and HIV, though the bulbs are actually very poisonous if eaten. Their scientific name Galanthus nivalis means ‘milk flower of the snow’ but they’re also known as ‘snow piercers’, ‘fair maids’ and (my favourite) ‘dingle dangles’! Another more sinister name is ‘death’s flower’. It was considered very unlucky to pick one, and to bring a single bloom into the house meant certain death.

Getting outside and looking for snowdrops is a brilliant way to boost your mental wellbeing. Take some time to connect with the tiny flowers and their struggles, take notice of their delicate structures and subtle green markings. Be like the snowdrop, trust in your roots, breathe deeply of the woodland air and look to the future with optimism and confidence.