Wild Ways Well in the snow

A bit of a mixed time for Wild Ways Well over the last week with the weather playing its hand as the Beast from the East continued to make its presence felt.

The Tuesday group had some training booked in where we were going to learn how to film our own nature based story, unfortunately the weather put paid to that with the heavy snow making travel just too dangerous.  We’re all really looking forward to getting another chance to do some filming though and I’m excited to hear what stories the group comes up with to tell.

The snow held off for the rest of the week so the Thursday group made it out and we decided to explore Cumbernauld Glen in the snow.  This is one of the longer walks we do, down from the town centre, so we took it nice and easy and made sure to Take Notice of the nature around us as we walked.  Most of the Snowdrops we had been admiring last time we were out are gone, hammered by the heavy snow fall – which reminded me of the poem by Francine Roberts on the back of our snowdrop booklet :

The Snowdrops pop their heads out of the ground

The Earth has thawed so they’ll just look around

Just when they think it’s safe

Snow gets dumped on their face

As Winter sneaks back in without a sound.

The snowdrops might be passed but we spotted the leaves and shoots of Lesser Celandine and Daffodils so it won’t be long before the woods are carpeted in yellow again.

The snow also let us unleash our inner animal tracker and we learned how to tell deer, fox, dog and badger tracks apart.  We spent some time following deer tracks, being amazed by how close they came to people’s houses – I wonder if those people even know they get night time visitors!

We reached my favourite spot in the Glen and as it was a cold one this week we made a much bigger fire than normal, being careful to use what we’ve learned in previous weeks to safely site and build it.  We used a hatchet to cut some kindling and one of our new members impressed everyone by lighting the fire first go with a fire steel!

Once the kettle was on boiling we turned our attention to food and had a go at making baked chocolate bananas and baked orange muffins on the fire.  I have to admit here that I think a baked banana is one of the foulest foods ever invented but I’m definitely in the minority there! 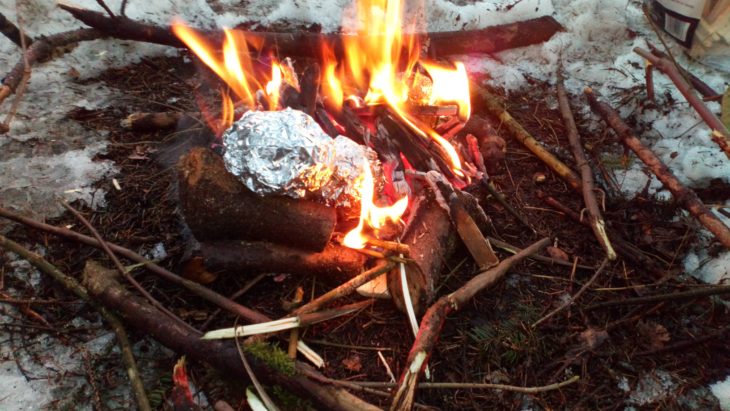 It was our first time making orange muffins and it was a bit of a mixed result – they weren’t very ‘muffiny’, but they were quite delicious in my opinion!  Making and sharing food and drink like this helps us to fill our Give action for the Five Ways Well but we also made sure to tidy the site afterwards, left no trace of our fire and took all our (and some other people’s) litter home with us.

We had a scout around for badger tracks and then made our way back to the town centre – with the added treat of spotting a Dipper on the river on the way back.

In total we covered about 3.5 miles and just over 13,000 steps so we’d definitely managed to Be Active.  But most importantly we’d spent a great time outdoors, in amongst some beautiful natural spaces, absorbing the feel of the woods, taking in the energy of the Sun and enjoying a chance to play in the snow!

If you would like to get involved in Wild Ways Well you can email me pbarclay@scottishwildlifetrust.org.uk or check out the webpage